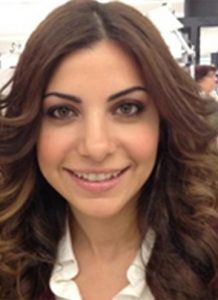 Associate Professor Tamar Boyadjian’s first book The City Lament: Jerusalem across the Medieval Mediterranean (Cornell UP, 2018) traces the trajectory of the genre of the poetic elegy for lost or fallen cities across the Mediterranean world during the period commonly referred to as the early Crusades (1095–1191), focusing on elegies and other expressions of loss that address the spiritual and strategic objective of those wars: Jerusalem. Through readings of city laments in English, French, Latin, Arabic, and Armenian literary traditions, Boyadjian challenges hegemonic and entrenched approaches to the study of medieval literature and the Crusades. The City Lament exposes significant literary intersections between Latin Christendom, the Islamic caliphates of the Middle East, and the Armenian kingdom of Cilicia, arguing for shared poetic and rhetorical modes. Reframing our understanding of literary sources produced across the medieval Mediterranean from an antagonistic, orientalist model to an analogous one, Boyadjian demonstrates how lamentations about the loss of Jerusalem, whether to Muslim or Christian forces, reveal fascinating parallels and rich, cross-cultural exchanges. 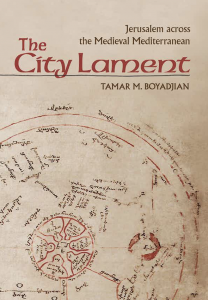 Adnan A. Husain (Queen’s University, Kingston) has called The City Lament “an impressive, unique, and original work of scholarship in several ways that make significant, imaginative contributions to fields of and approaches to the study of medieval literary and religious culture.” Suzanne Conklin Akbari (University of Toronto) describes Dr. Boyadjian’s book as “an important and well-conceived study that will make a significant contribution to the field” by “[widening] our frame of reference [and] bringing in the enormously significant Kingdom of Armenia, enhancing our understanding of this crucial period of history.”

We asked Dr. Boyadjian to describe the ways in which her teaching at MSU informed her writing and research process:

“Teaching has always been a wonderful opportunity for me to inform my research. I love to teach and I am so passionate about the craft! I have taught graduate and undergraduate courses in the English department around the themes of the “crusades” and reframing the field into larger non-compartmentalized frameworks such as a the Mediterranean.

As a poet and translator, this department has also allowed me the opportunity to work with creative writers and future translators. I have crafted lines of poetry in class -inspired by my brilliant students. I have also had the opportunity to work through both theoretical and practical approaches to translation through the graduate and undergraduate seminars I have taught in translation theory.

They say the best teachers are the best learners. I am constantly learning from my students as I teach them, and I have found that the most rewarding parts of teaching come from the knowing that both you and your students have come to grow together, to understand yourselves and the world around you in more intricate, sophisticated, and beautifully rewarding ways.” 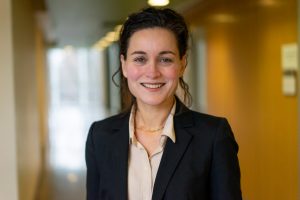 My first book, The Dream Life of Citizens: Late Victorian Novels and the Fantasy of the State (Fordham University Press, 2012), grew out of a simple moment of reading a Victorian novel by George Gissing, The Odd Women (1893). In one striking scene, two very urbane and sophisticated characters, Rhoda Nunn, a feminist, and Everard Barfoot, an aimless dilettante, bat the idea of a benevolent state back and forth (this is how they flirt). Everard playfully tells a story about his old math tutor, who, after being engaged for seventeen years, is finally economically secure enough to marry. Barfoot remarks, “’Pathetic, don’t you think? I have a theory that when an engagement has lasted ten years, with constancy on both sides, and poverty still prevents marriage, the State ought to make provision for a man in some way, according to his social standing.” Rhoda joins the fun: “’If,’ remarked Rhoda, ‘it were first provided that no marriage should take place until after a ten years’ engagement.’” She later adds, “’And no marriage, except where both, for the whole decennium, have earned their living by work that the State recognizes.’”

When I read this scene, I had so many questions! It felt like such a modern moment, people joking and making fun of the idea that the state could and should step in and improve your life, that “the State” ought to do x, and the idea that, for that service, one would have to submit to classifications, regulations, and norms. How did this moment all of a sudden appear in a Victorian novel? From these set of questions, I eventually wrote a book that made the case for thinking about the production of what I termed state fantasy in late-Victorian British culture. By state fantasy, I meant a two-part psychic and linguistic process familiar to us today: the packaging of what are in fact contradictory and often incongruous practices, discourses, institutions, and administrators into a coherent, knowable entity, commonly referred to as “the State” with a big “S,” and the simultaneous investment of this entity with person-like qualities. It is impossible not to refer to the state, even when we know that it is so heterogeneous and often in conflict with itself. That we cannot fully escape state fantasy, I argued, tells us how fundamental an idea of the state is to modern psychic lives. 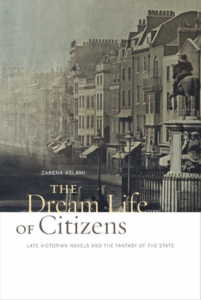 In this book, I began to explore what would become my current project: Victorian fantasies of Afghanistan. I am half-Afghan and grew up in the United States, where, until 9/11, nobody ever talked about the country which half of my relatives are from. As I researched state fantasy, I began to think about the two Victorian wars in Afghanistan, one in the 1830s and one in the 1880s, roughly. Reading Victorian novels and political speeches about these wars, I was struck at how vague Afghanistan appeared to the British, despite invading, occupying, and then evacuating it twice in the nineteenth century. I was also struck by how Victorian literature staged the breakdown of the British self in the Afghan setting, as if Afghanistan’s vagueness became an occasion for the British to play out their horrors about an interventionist state.

This chapter on Victorian Afghanistan in The Dream Life of Citizens inspired my current book project, Sovereign Anxieties: Victorian Afghanistan and the Margins of Empire. Here, I collect an archive of Victorian representations of Afghanistan. These representations include a range of literary texts, such as novels, poetry, and short stories, as well as nonliterary texts, including ethnologies, histories, and memoirs. I also examine visual texts, such as paintings, political cartoons, photographs, and drawings. I argue that these texts are fixated on what they construct as the impossibility of Afghan sovereignty. This impossibility, the fantasy goes, was due to the fundamental ungovernability of the Afghan subject. I explore how nineteenth-century categories of race operate in this context, which shift after the advent of mid-nineteenth-century so-called race science. What remains consistent, though, is the British sense that Afghans are both a homogeneous category, but also a profusion of antagonistic ethnic groups, consisting of fanatical, hyperindividual, and vindictive people, all of which prevent them from attaching to the modern nation form and thereby achieving both individual and national sovereignty. The failure of Afghan sovereignty is thus attributed to their character and environment, rather than to the form of sovereignty that the British were imposing upon them. I situate this fantasy of the impossibility of Afghan sovereignty within a nineteenth-century history of British relations with Afghanistan and of British cultural anxieties about the status of sovereignty.

My teaching at MSU has made me even more committed to devoting my research and writing to what I love, because that is what I want for students who take my classes to do: to use whatever tools and practices my course might introduce them to as they pursue their interests and deepen and at times challenge their own knowledge. I feel the responsibility of modeling that for them. I try to foster students’ pursuit of what interests them within my classes by having them lead class discussion or setting the questions for the day. In short, I think of them as scholars from the moment they sign up for my course.

In my fifteen years of teaching at MSU, I have been consistently blown away by what our students notice about and how they interpret our texts—texts that I have taught multiple times and which I’ve even researched and published on. Each student has a unique history and perspective, which they bring to the texts and discussions.

I feel spectacularly lucky to engage in regular conversations about ideas with our MSU English majors. Quite simply, they bring a brilliance into the classroom that enriches my understanding of literature and life and makes me grateful to be part of a community of thinkers that includes them!