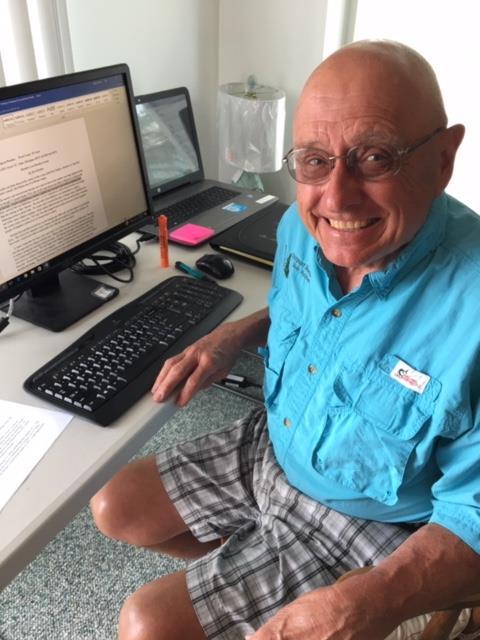 What do you currently do?
I am a freelance outdoor travel writer with 442 published stories across the United States and a self-published author of four books including Canadian Fly-In Fishing Adventure (1993), Alaskan Spirit Journey (1999), The Mountains Shall Depart (2017), and The Hills Shall Be Removed (2018). I am a member of the Michigan Outdoor Writers Association and the Association of Great Lakes Outdoor Writers (AGLOW). I have presented sessions at the annual AGLOW conference including a joint keynote session, new member sessions, and a self-publishing session. I also speak at community events, campgrounds, and libraries.

What projects are you currently working on?
In addition to writing outdoor travel stories, the sequel to my third and fourth book is underway with a target completion date of early next summer. The book will finish the trilogy.

Tell us about the awards you have won for your writing including the third-place award you recently received from AGLOW in the Best Book category for the novella The Mountains Shall Depart.
It was an honor to receive the Best Book category award. Other national awards from the Association of Great Lakes Outdoor Writers include first place for Best Newspaper Story, third place in the Newspaper Open category, two presidential awards for service, and from the Michigan Outdoor Writers Association a third place.

How did you get into writing?
I had an English instructor at Delta Junior College (Mr. Cahill) for a writing class and he initially inspired me to write. I found poetry and literature inspiring. Good teachers are motivators; they allow the seed to sprout and grow.

Where do you get your inspiration for your writing?
The words do not come from me, but rather through me. Each person has God-given talents that can either be watered or wilt away. Life has its joys, challenges, and hard times. The difficult times are only temporary, never permanent, unless a person lets them be. At MSU, I took a class studying Hemingway’s work. F. Scott Fitzgerald and Harper Lee also are authors I admired.

What are some of your favorite memories of your days as a student at MSU?
My wife, Shirley, and I lived in married housing in Spartan Village. She worked in the Communication Department. Friendships were made and have lasted a lifetime. I vividly remember various lectures of dedicated professors who taught from the heart, encouraged, and inspired me.

The words do not come from me, but rather through me. Each person has God-given talents that can either be watered or wilt away. Life has its joys, challenges, and hard times. The difficult times are only temporary, never permanent, unless a person lets them be.

How has your English major, with an emphasis in Creative Writing, and Arts & Letters education helped with your career?
The foundation for my life was poured in concrete with a hard work ethic from growing up on a family farm, determination, and a will to never give up. My wife, Shirley, believed in me in the early years when I wondered if I’d ever make it through college. She believed in me for so long that the seed for my self-confidence was planted and the rest of the story is still being written!

What do you see as the importance of a liberal arts education?
The arts are an important part of life, which allow creativity to blossom into a lifelong learning adventure. Often my muse arouses me from sleep with an idea, a phrase which spills into a sentence, then a paragraph, and finally the story arrives at its climax followed by the resolution. When the story is finished, I am fully satisfied and out of breath. The words do not come from me, but rather through me. Writing is a God-given gift!

Explain the process you go through with your writing:
In writing (as well as other art forms), a person either celebrates life or writes about what troubles him. The Mountains Shall Depart dealt with the events leading up to the suicide of my father and my attempt to let go of a past that was out of his control. Often, I awaken in the middle of the night with an idea. I toss and turn and have learned not to force myself back to sleep, but rather to get up and write. My mistress, the muse arrives for an erotic encounter with the words, and I begin the chase. She always remains just out of reach, and by the time the story reaches its climax and resolution, I am out of breath and fully satisfied. The sequel, titled The Hills Shall Be Removed, also comes from the book of Isaiah chapter 54 verse 10. The book traces German immigrants arriving in the new land in the early 1600s. It traces the corruption behind the scenes involving bankers, attorneys, and corporate farms that combine to destroy the lives of farming families. A number of farmers in a place called Hamlet not only shot themselves, one hung himself, and another jumped from the top of a grain elevator. I allow the ideas to flow and usually write around 800-900 words in a sitting.

Your advice to students:
I graduated in the bottom ¼ of my high school class and applied to Delta Junior College. I was not admitted because I was deficient in English, reading, and math. However, if I agreed to take remedial classes during the summer and pass them, I would be admitted in the fall. I purchased my remedial books and entered our kitchen where my father stated: “Why did you buy all that crap, you’ll never make it!” It was in the later years when I realized what a favor he had given me. I had an excellent English and writing instructor at Delta, who encouraged my writing. I taught two classes of students at St. Johns High School that were deficient in basic skills and many couldn’t read. I convinced my principal to purchase a book for the classes, titled See You at the Top by Zig Ziglar. Each day at the beginning of class, I’d count to three, we’d all clap and state, “I’m going to have a good day today!” Once the positive thought was planted, students’ behavior and attitudes improved. After 21 days, significant changes occurred. On occasion, I’d skip the ritual exercise and a student would ask:

“Aren’t we going to say, I’m going to have a good day today?”

And so, life-changing behaviors were planted and bloomed!