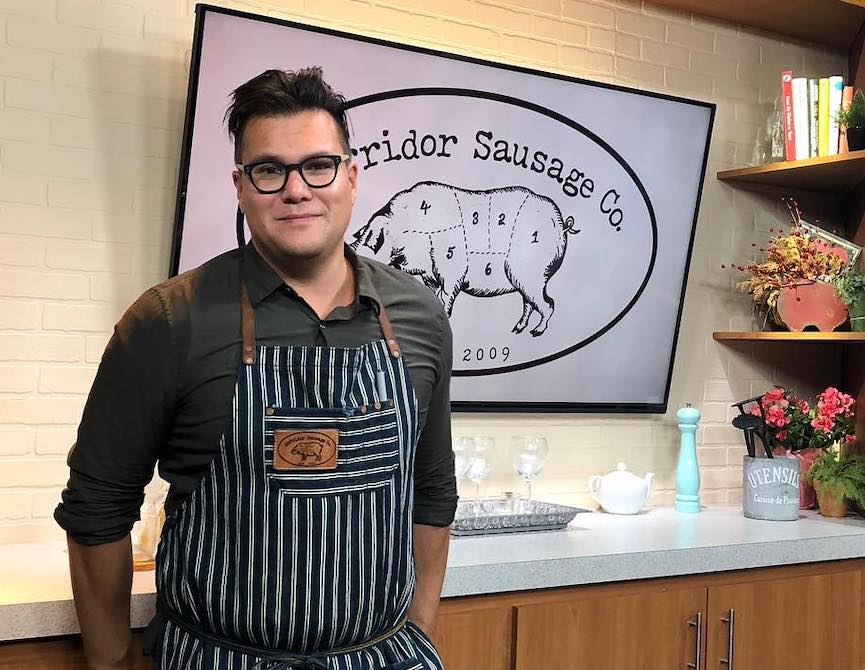 An English degree may seem like an unlikely career path for a culinary entrepreneur, but to Michigan State University alumnus Will Branch, his B.A. in English has proved to be the perfect ingredient upon which he built a successful artisan sausage company.

“As the owner of Corridor Sausage, my job requires effective communication, like how to put together marketing plans and sell to people,” said Branch, who graduated from MSU in 2002. “As non-traditional as my English background might be for my current career, it really did help in that aspect and helped me present the company in a way that I don’t know if I would be able to otherwise.”

But how does one go from studying English to owning a sausage company? For Branch, it was his decision to go to culinary school that helped pave the way to his current career.

My English background…really did help in that aspect and helped me present the company in a way that I don’t know if I would be able to otherwise.

Five years after graduating from MSU, Branch decided he wanted to go back to school and gave himself the choice of whether to go to law school or culinary school. He chose the latter and enrolled in the Culinary Arts program at Schoolcraft College.

While working in restaurants as a culinary student, he met his business partner, Zachary Klein, and in 2009, the two founded Corridor Sausage out of a small butcher shop in Howell, Michigan.

The first two years of the business, Branch and Klein promoted their company at every opportunity, selling their products at farmer’s markets and pop-up events. After growing and stabilizing their brand, the company expanded in 2011 from the back room of a butcher shop to a USDA factory in Detroit’s Eastern Market.

Corridor Sausage can now be found in more than 300 restaurants and 300 grocery stores across 14 different states, and it can be made to order at Detroit Metropolitan Airport, Ford Field, Little Caesars Arena, and The Henry Ford Museum.

“Figuring out your business is not common sense, but hard work, and not being afraid to put in the time and effort and knowing you’re picking the path that isn’t the easiest. These are things you’re going to need to know going into it,” Branch said. “You can learn anything on the fly as long as you’re creative, hardworking, and curious.”

Branch’s passion for culinary arts was borne out of his family roots.

“My mother’s side of the family is Chinese, so we always had a lot of family coming together to make food,” Branch said. “Early on in life, I loved cooking and baking with my mom, and in college, I would make big meals for my roommates and neighbors. Food is communal, familial, and an opportunity to give something to the people you care about.”

You can learn anything on the fly as long as you’re creative, hardworking, and curious.

One way Branch gives back to the community he cares about is by serving as Vice President of the Board of Directors for Detroit’s FoodLab. Founded in 2011, FoodLab is a community of food entrepreneurs committed to building viable food systems and making the possibility of good food in Detroit a sustainable reality.

“I love the work I participate in at the FoodLab because it’s all about giving back to the community,” Branch said. “FoodLab is relationship-based, not just product, and really centers around understanding what makes you unique in the market place. So much of what we do in the food industry is relationship-based. There’s always going to be someone out there that’s going to know more about a certain topic than you do. Initiatives like Food@MSU and the FoodLab in Detroit are needed, because through those programs, you are able to get insight on the food industry and build relationships with mentors and peers. Those mentorships are the most important relationships you can have.”

In 2018, Branch was named to the annual list put out by Crain’s Detroit Business of the 40 Under 40 rising business stars.